There is an influence that can sometimes be forgotten about war. 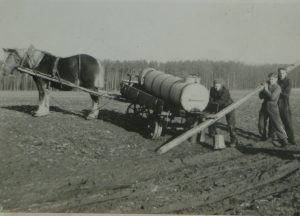 My dad as a teenager freeing a wagon outside a refugee camp. WWII

Even in peacetime, former refugees can still pass on the effects of war to their children. These parents experienced terrible things. It traumatized them, harmed them, and moulded them.

And, even though their post-war children were born into apparent peace, these children too became survivors of war. For decades they may have had to deal with the consequences of their parents’ broken hearts and minds. But thankfully, this isn’t the end of the story.

Ordinary people in ordinary walks of life have dared to step up and embrace those refugees and children. They have dared to get involved. So I celebrate an even greater army of selfless heroes, those who one hug after another, reverse the effects of war.

Posted in a wounded heart, first generation survivors of war, hope for refugee children, Memorial day, those who reverse the effects of war, unsung heros

Tagged caring for refugees, hope in hopeless situations, hugs can reverse the effects of war, those who care for refugees, unsung heroes, war